Armit Wines Blog → A Night to Remember: Sassicaia Dinner at the Italian Embassy

Last night was a reminder of why great wine always prevails above the fickle winds of market conditions or critical opinion. Priscilla Incisa Della Rocchetta, granddaughter of founder Marchese Mario Incisa Della Rocchetta, hosted an evening at the Italian Embassy alongside the Italian Ambassador to celebrate a selection of legendary wines from Tenuta San Guido. Within this grand setting, four decades of Sassicaia were tasted by collectors and enthusiasts tracking a themed line of excellence across some of the most exquisite Cabernet in the world. An education that was a privilege to be a part of. The magnificent dining room at the Italian Embassy provided the perfect backdrop for such an elegant and noble wine. The contrast of this esteemed affair under high ceilings in the big city to celebrate a wine so humble in its DNA and rooted in rural Tuscany worked perfectly, much like the delicious Mediterranean food enjoyed on Italian soil in the midst of a dark London night.

Harmony and balance are two of the most important characteristics that underpin any of the descriptors you would use to describe Sassicaia; understated, attractive, elegant. Sassicaia is a wine that is powerful and refined, an influential star pushing complexity to the limit and maintaining freshness in its core. It is little wonder that the family were put under immense pressure in the early '70s to allow a wine, previously only made for family and friends to be opened up for all to enjoy. The fine wine world would not be the same without this decision.An address from the Ambassador at the start of the meal reminded us that the best investments in life are in the joyous times we have and the memories we create. While Sassicaia has brought financial rewards to many, great wine helps to create priceless moments. This wisdom set the tone for a memorable night.

The first flight consisted of Le Difese 2013 and Guidalberto 2013 accompanying Braised Hare Tortellini with seasonal truffle. Le Difese is deeply entrenched in its Tuscan roots, an enjoyable wine in its youth and the only wine in the stable to contain Sangiovese (30%) alongside Cabernet Sauvignon (70%). It is a deeply mineral cuvée that displayed the quality of Tuscany’s 2013 vintage and the joyful match of Sangiovese and Cabernet Sauvignon that coined the term Super Tuscan. Moving onto the Guidalberto 2013, there was a noticeable step up in quality. Where Le Difese was vibrant and youthful, Guidalberto showed the seriousness and complexity of a quality left bank Bordeaux; no surprise considering the blend of 60% Cabernet Sauvignon and 40% Merlot. This wine was a display of what this great Cabernet estate can do with Merlot. It is my firm conviction that where Sassicaia is a wine that defines the region, Guidalberto is one of the best value Tuscan wines you can find. A fantastic warm up to the main event that lay ahead. 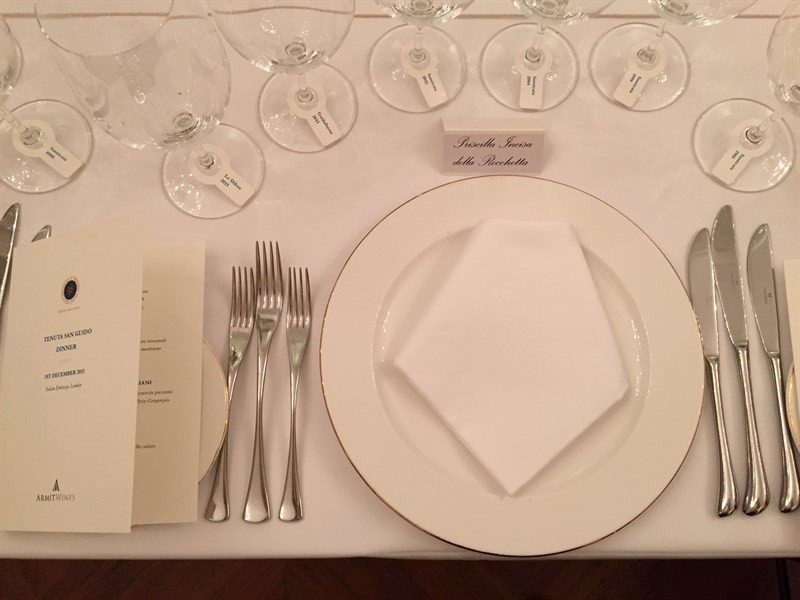 Excitement began to brew as Sassicaia 2012 and 2004 were poured out for the main course of Scottish beef "Tagliata" with winter vegetables and mushrooms. The 2004 was immediately appealing on the nose, showing signs of development with secondary notes of truffle amongst the supple and refined profile. The 2012 displayed cascades of complexity under the attractive primary fruit. I have tasted this wine three times now and it continues to impress me more and more. I really do think this will be a star Sassicaia for the ages. Avid collectors of the wine were in agreement that it had everything required to become a great down the line; concentration, freshness, structure, character, beauty and refinement.

The star attractions were clearly the 1999 and 1988 and they did not disappoint. Tuscan pecorino, creamy goat's cheese with fresh herbs and spicy gorgonzola accompanied both wines. The 1999 was a consistent performer from the moment it hit the glass until the last drop. Definitely in its secondary phase, there was beautiful density and complexity from the nose until the finish that was defined by spice, graphite, clear fruit and acidity.

It was my first time having the privilege to try the much lauded 1988 and the initial signs showed a wine reaching peak maturity. The nose was kaleidoscopic yet initially unresolved. The palate was fine yet a little dry on the finish. My excitement quickly turned into concern that this once all conquering wine was starting to reach a decline. How wrong I was. The best wines can be reluctant and begrudging to begin with, they can take a while to reveal themselves before dazzling the crowd and holding a room of 40, and that was exactly what happened. The attention was firmly on the 1999 as the 1988 blossomed into fulfilling its legendary status in the glass . Once this happened, WOW! Balance was restored, the finish displayed crystalline pure fruit with fluid texture which helped carry the tertiary layers through to a resonant finish worthy of an encore. Bravo!

The 1999's consistency and youthful vibrancy threatened to steal the show but the 1988 reclaimed the throne resoundingly to become the wine of the night. The 2004 was somewhat overshadowed by its older siblings but should not be ignored as its unforthcoming nature begins to grow in confidence with a few more years. The precocious 2012 was too good to ignore and worthy of its seat at this table of greats.