Armit Wines Blog → A Night to Remember with Giacosa 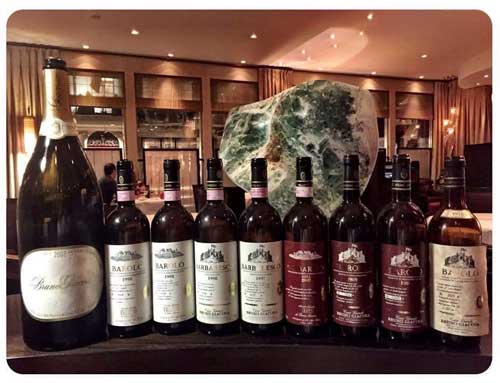 I am often asked by those in and outside the trade what my favourite wines are. When it comes to red, Nebbiolo reigns supreme. And if Nebbiolo reaches the heights others cannot, then Bruno Giacosa is king of Piedmont. Of course there are other great producers, most notably Gaja from Barbaresco (few producers have done more to further to reputation of Piedmont and Italian fine wines in general) and Giacomo Conterno from Monforte with his iconic Monfortino Barolo. However, there is no one better at creating wines with an ethereal touch and perfect balance of femininity and masculinity, the iron fist in the velvet glove if you will, than Giacosa.

The dinner was hosted by the owner of the Square (as well as the Ledbury, Chez Bruce, La Trompette and the Glass House), Nigel Platts Martin and was merely meant to serve as a celebration of the wines of Giacosa to some of his biggest fans, of which I count myself as one. A special menu was devised to go with a Barbaresco and Barolo only dinner, which consisted of:

Accompanied by the following wines:

Spumante Extra Brut 2007 (Jeroboam)
Always a more savoury edge than most traditional method wines. This is made from 100% pinot noir grapes sourced Oltrepo Pavese in Lombardia. It has a very creamy texture and a noticeably rounded acid. More of a food wine than an aperitif style, but with a lovely silky texture and red apple profile.

Barbaresco Gallina di Neive 1998
Always a real treat to taste this wine, as it is the last vintage the Giacosa ever made of this cru. Situated on the South Western Side of Neive, Gallina has very heavy Calcerous deposits. Delicate fruit wafts from the glass with savoury notes of cold meats and warm earthiness. Seamless.

Barolo Falletto 1998
From the famed monopole vineyard which Giacosa bought in 1982. What always strikes me most about the Giacosa’s Falletto Barolos is the density of fruit but coupled with the wonderful lift at the end. In incredibly deep sweet core of red fruit, very supple tannins leading onto to a finish of cherry liqueur, fennel and spice.

Barbaresco Santo Stefano 1997
Sourced since the 1960s from Castello di Nieve on a long term contract, which expired in 2012, this wines always displays a very sturdy structure, coming as it does from very rich clay soils. What it lacks in elegance compared to the sandier soils of Asili, it makes up for in power and density. Earthy but with lifted notes of rosehip and spiced red fruit compote. Incredibly long and pure finish.

Barbaresco Asili Riserva 2007
It’s always a treat to try one of Giacosa red labels, and while the 2007 is clearly still in its infancy, one was immediately struck by the brightness and purity of the fruit. An almost sweet marzipan attack. Spiced red fruit compote leaped from the glass, with just the faintest hints of Assam tea and liquorice. The tannins while still present and surprisingly pliable and lead to a very harmonious and sweet finish.

Barolo Falletto Riserva 1989
Mushroom and undergrowth nose, leads onto a very tactile and silky texture. Beguiling palate of Asian spice and even celery. More mature on the nose and palate than the 1986 but incredible power, stature and elegance.

Barolo Falletto Riserva 1986
For some the wine of the night. Dusty cherry fruit on the nose, incredibly understated and elegant. Notes of Assam tea, spiced cherry, rose petals and exotic spice. Perfect balance of fruit concentration and discreet structure. Harmonious and a complete joy from start to finish.

Barolo Villero 1978
For others the wine of the night. Very enticing and earthy bouquet. Incredibly rich notes of heady spice, but with a freshness that was bewildering for a wine of nearly forty years old. This wine has another 15 years plus ahead of it at peak drinking.

Much has been said and written about Giacosa in the last few years. What I can confirm is that the most recent releases, the Barolo Falletto 2011 and Barbaresco Asili 2011 are outstanding. I remember tasting them with the Armit Sales team recently and remember nothing but smiles across everyone’s faces as we tried these beautiful and incredibly accessible wines. The return of long time oenologist Dante Scaglioni, working alongside the talented Francesco Versio, has done nothing but good for the continued quality of the wines, but what this dinner confirmed is that Bruno Giacosa has made some of the most historic wines that will grace any dinner table.

While I am not a huge fan of pandering to the words of wine critics, there is one quote that always sticks in my mind and one that I would wholeheartedly agree with:

“Perhaps the greatest compliment I could confer on Bruno Giacosa is that there are no wines in the world I buy without tasting them first, except for those of one producer, the Professor of Nebbiolo (Bruno Giacosa).”
Robert Parker, The World’s Greatest Wine Estates, 2005