First stop was Châteauneuf, a visit to La Vieille Julienne, and a tasting with the philosophical Jean-Paul Daumen, wine maker and fifth generation owner of the estate. Here we looked at Jean-Paul’s 2012s as he doesn’t show his wines until he feels they are ready. His is a distinctive take on Châteauneuf. The wines don’t lack concentration, but they are also refined, thoughtful wines, nuanced and layered. We will offer them later in November so watch this space. 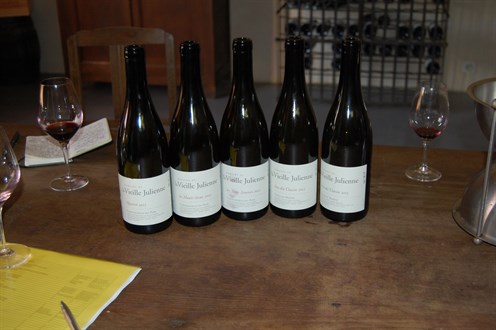 At Andre Brunel and Vieux Telegraphe we tasted 2013s and heard about a problematic vintage for Grenache, hit by Coulure, and the low yields that resulted. Good producers make good wines however, and both tastings showed the vintage to be a positive success for those who like structure and freshness in their wines. 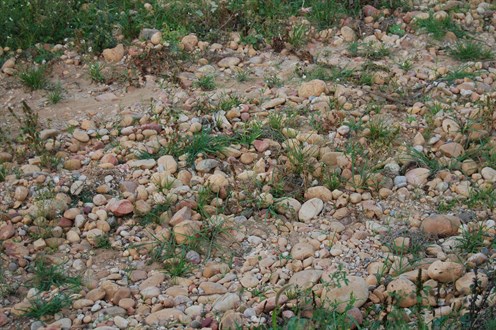 Overnight the Mistral had sprung up. This cold wind which whips down the Rhône valley, gaining strength as it goes, is an incredible thing to experience. Its constant howling seems to strip away clothing and skin and attack the nerves directly. After a windswept drive we arrived at Gourt de Mautens in Rasteau. This groundbreaking estate is making some of the finest wines of the village. We tasted a three vintage vertical, 2010, 2009 and 2008, each showed brilliantly, consistently delicious wines, each framed within their vintage and showing the progressive complexity age brings. They transcended Rasteau’s image and showed its potential to make fine wine.

Next stop, Domaine La Bouissiere in Gigondas, was a revelation, wines of purity and elegance, we will offer soon. They are fresh, pure and full of joy and I would heartily recommend them. 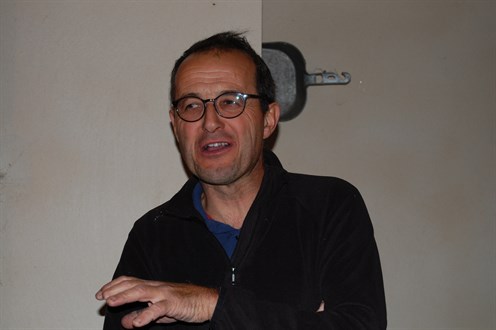 Lunch at l’Oustalet, owned by the Perrin family of Beaucastel, was delicious; a half bottle of Villard St Peray ‘Version’ 2012 was perfumed, honeyed and resinous, Domaine Giraud CNDP les Gallimardes 1999 was drinking perfectly. This is a restaurant which should be on everyone’s 'must-try' list.

The next day found us at Alain Voge in Cornas. We tasted with the winemaker Albert Mazoyers, a man passionate about the future of Cornas and St Peray. Albert explained the traditional image of Cornas, of tough, unyielding wines, was a product of bad wine making rather than terroir and that Voge aimed to make elegant wines to drink after four years in bottle, but best at 12-15 years. This was a great tasting, the 2013s are delicious, Albert was very happy with the wines and the vintage in general looked excellent in the Northern Rhône. Coulure, scourge of the South and the grenache, had also affected Syrah in the North, lowering yields. But in the North the weather had been kinder. 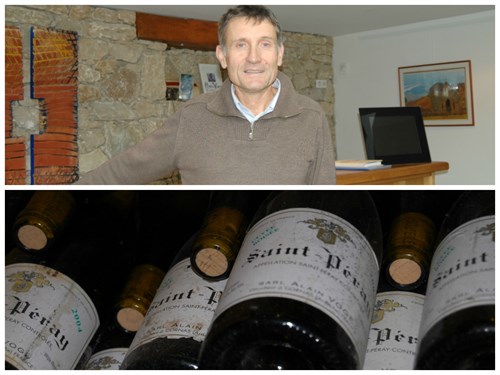 Later we had the simply brilliant opportunity to visit La Chapelle, the building at the very top of the 'Hill of Hermitage', where a returning Crusader built the dwelling which gives the hill, town and wine its name. The views are truly spectacular, the vineyards steep and back-breaking and as is so often, it is not until one has stood in the vineyards that one understands what it takes to make a wine. This is one of the great wine experiences and it was an absolute pleasure to be there. 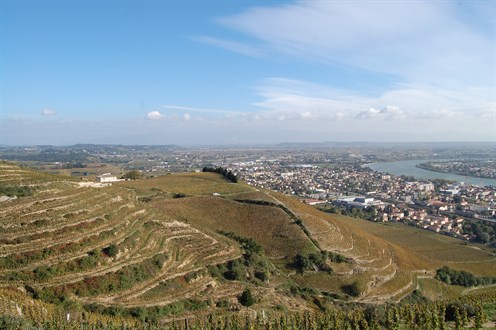 The next morning, North to Condrieu, we drove up the steep roads past the terraced Viognier in the light of a spectacular sunrise. The Rhône glowed below, the early morning mist merged into the clouds, giving a sense of being on top of the world. An exhilarating view and a fitting way to prepare for a busy last day and some very fine wines.

Villard has made a remarkable range of wines in 2013. Tasting through the whites reminded me of a tasting in Burgundy, as the wines built in concentration, complexity and beauty. The final three Condrieu were a revelation; Les Terrasses du Palat was exceptional, Le Grand Valon was a tower of steel and glass, coiled energy and precision, while the final wine, De Poncins was all of the above with an added dimension of richness and power. These are striking wines indeed. 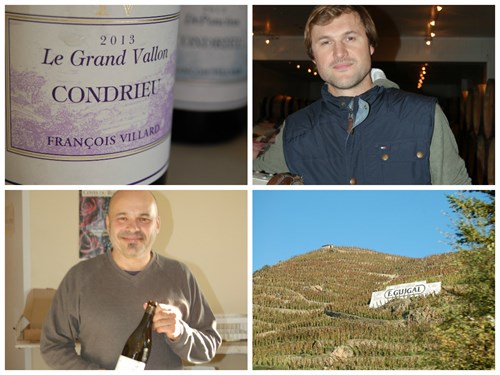 Back in the car and further North still to Côte-Rôtie, driving in the shadow of the achingly steep terraced vineyards. At Ogier we tasted a fascinating selection of the 17 Lieux Dits which, blended, will become their Côte-Rôtie, as well as the brilliant single vineyard wines, La Belle Helene and Lancement.

Next up was Rostaing, where Rene and his son Pierre make traditional wines of the highest quality, with no new oak and minimal intervention. This is an estate in transition, as 2014 will be Rene’s last vintage before he passes the reigns onto Pierre, who he expects to make his own touches and prepare the ground for the future, as each generation does. I feel the future is in good hands here. Rene has 45 vintages under his belt, he describes 2013 as a great vintage, the harvest began in October, almost the latest he has ever seen. The wines here should be in any Rhône lover’s collection. 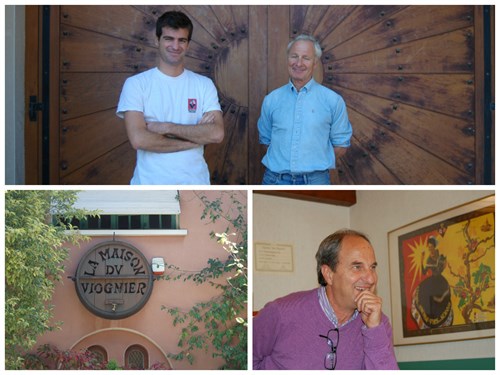 Two more visits to go, first Vernay, the ‘home of viognier’ as the sign on the winery has it. Before Georges started his life-long campaign to get it the recognition he knew it deserved, Condrieu and its unique grape, Viognier, was almost extinct, plantings having dwindled to 6ha. Georges was instrumental in defining the appellation and worked tirelessly to promote the wines. Today his daughter Caroline continues his work with Condrieu alongside her husband Paul Ansellem, but has also worked hard to make the Côte-Rôtie some of the best in the appellation; they are elegant and full of finesse. The Condrieu, especially the Coteaux de Vernon, are amongst the finest whites anywhere, and deserve their place in wine legend.

The last visit of the trip was to Jamet, outside the town and up on the plateau, where Jean-Paul makes traditional wines and shuns new oak, blending his various parcels to make a balanced, harmonious expression of Côte-Rôtie. He harvests in tries, stages, to achieve perfect ripeness, and uses a good proportion of stems to add tension to his wine. We tasted the 2013, 2012 and 2011 Côte-Rôtie and they were marked by their freshness and focus. We asked Jean-Paul about the vintages. He thought that all three were very good, for him better than 2009 and 2010, and that patience would be needed for the 2012. We asked about 2013; "more patience!"

It had been a brilliant four days of tasting. Too often conversation regarding the Southern Rhône is dominated by high alcohol, absurdly rich wines and a certain American palate, but in reality there are wines of every kind being produced from these historic villages, and those who seek balance and elegance will find much to enjoy. The Northern Rhône on the other hand, is something of an enigma. On one hand there is the image of dark, brooding and tannic wines that need a lifetime to come round, of rustic flavours and inconsistent wine making. On the other, a new generation of wine makers determined to create wines which better suit today’s tastes and time frames. As in the South, the best wine makers seek balance, producing wines of great purity and pleasure whilst changing our notion of their terroir.

Find out more about our Rhone wine producers and recommendations from the region by speaking with Jack from the Private Client team.