You can read the original Italian version of this blog post via the link below.

The 26th and 27th February saw the start of my "Giro d’Italia 2014": A tour of the Italian regions matching regional food and wine. My first stop was San Lorenzo Fuoriporta in Wimbledon, a well-establised London restaurant dating back to the late 60s. Along with its sister restaurant, San Lorenzo in Knightsbridge, the restaurant marked a transition period in the history of Italian restaurants in the British capital.

Both were founded within 6 years of each other by Mara and Lorenzo Berni, who managed to create a unique, high-quality brand, able to excite both English and Italian palates with its authentic Italian dishes. The business, now run by their children Ghigo and Paolo Berni, centres itself around their teachings around  taste and the importance of fresh produce. It’s thanks to these two that the Sicilian-inspired evenings took place, quite literally bewitching their clients.

Typical island dishes were expertly created by their outstanding chef; stuffed aubergine, rabbit, lumaconi (snail shell) pasta with fish, oven-baked cod gratiné, marinated tuna in salsa tonnata (typical tuna sauce), and to finish, an exquisite orange granite, jasmine ice-cream (which brought back childhood memories) and the famous and delicious ricotta torta. I was more than happy to be able to take part in these two evenings, matching wines from two Sicilian wineries imported to the UK by our company, Armit Wines. Originally starting as a Marsala producer in 1860, Rallo now produces still and sweet wines from native vines cultivated on parcels of land in Alcamo, Marsala and Pantelleria. Pietradolce is a small winery on the north facing side of Etna producing wines from pre-phylloxeral vines dating back 100s of years. 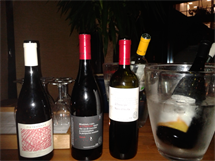 A total of six wines - red, white and rosé - were initially tasted by the clients in the following order : Cataratto Carta d’Oro DOP Alcamo 2012, Archineri Etna Bianco DOC 2012, Etna Rosato DOC 2012, Syrah DOP Rallo 2012, Il Principe Nero D’Avola IGP 2012, Etna Rosso DOC 2012 Pietradolce. On a personal note, I was impressed by the level of the client’s oenological knowledge and that they all took great interest in learning about the wines, including the technical side which can sometimes be rather boring for the consumer.

The two evenings saw significant participation from the clients who were eager to try new grape varieties like Carricante, Catarratto, Nerello Mascalese as well as the others already mentioned. Having tasted them they then chose their favourite to have with dinner, matching them with dishes chosen according to their personal taste. The presence of the two organisers and delightful owners- Ghigo and Paolo - made this evening a real success and was just the start of a tour around other Italian regions. In cultures such as in England, where consumers appreciate homemade Italian food, being able to present a piece of Italy and immersing them in a distant yet tangible place is really satisfying.

Due to the exquisite food and wine and the professionalism of the Berni brothers, the evening was a great success. Another event will soon be organised around a different Italian region and we will let you know the dates in advance to give you the chance to participate too.  Stay tuned so as not to miss out on a piece of our “Bella Italia”.