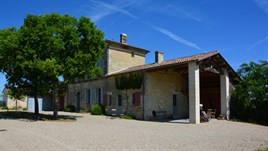 “The first thing my parents did when they took over here in 1985 was to take down all the signs to Chateau Lafleur,” Baptiste Guinaudeau explained when we turned up for our appointment. The “chateau” is a somewhat obscure farmhouse with a tiny plot of 4.58 ha adjoining the vineyards of Chateau Pétrus. Keeping an appointment at Lafleur is a test of ability to draw deductions from the map.

When Henri Greloud bought the property in 1872, his vision was to buy small plots and merge them into larger properties, but he felt Lafleur was special and he decided to keep it separate and not to merge it with Le Gay. He built separate cellars so that Lafleur could be independent. Without that decision Lafleur would have become part of Le Gay,” explains Baptiste, who is his great-great grandson. Both properties remained in the family for many years, but today the family properties are Lafleur and also Grand Village, in neighboring Fronsac. 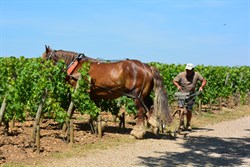 Lafleur is usually about 55% Cabernet Franc to 45% Merlot, which gives it a restrained character quite different from the average Pomerol. Pensées de Lafleur started as a second wine in 1987, soon after Jacques Guinaudeau took over, and for the first ten years was based on declassification of lots, assignment of wines from young vines, etc. But since 1995 it’s come 90% from a specific part of the vineyard, a lower strip running along the southwest border. It more or less reverses the proportions of varieties in Lafleur.

The focus in winemaking is to avoid too much extraction. “We don’t use the word extraction, we want to infuse, the best tannins come without intervention in the first days of fermentation. Cuvaison is only 12-15 days, which is short for Bordeaux, because the wine is already well structured.” Élevage sees some restraint. “We love barrels but we hate oak. 80% of Lafleur and Pensées ages in 6-month barrels coming from Grand Village, the rest is new oak.” And alcohol levels are generally moderate. “It’s impossible to be ripe with less than 13% alcohol in Bordeaux now, but you can be completely ripe at 13.6%. People are going to crazy levels of alcohol to impress critics.” This is old fashioned Bordeaux in the best sense – elegant rather than powerful or jammy fruits, moderate alcohol, restrained wood.

Lafleur can display a touch of austerity coming from its high Cabernet Franc content. It definitely needs more time than average to show its full complexity. “Lafleur is closest to Cheval on the Right Bank, but it’s much easier to compare it to Latour (in Pauillac) than to Pétrus, our style is more masculine, more Left Bank,” says Baptiste. It’s fascinating that the two top wines of Pomerol, Pétrus and Lafleur, should be adjacent, yet so very different.