27th March 2014. I may be biased, but Armit’s Annual Italian Tasting is always one of the best events in the London Wine Trade calendar and this year was our best yet in terms of range of producers and visitors, reinforcing the UK trade’s interest in the wines from this country, and Armit’s world class selections.

I spent the early part of the morning before the punters arrived pretending to be busy, but mostly tasting new vintages and wines from our fantastic new producers.

My first call was the new vintages from Tenuta dell’ Ornellaia. First up was Le Volte 2011 and 2012: a great pair of vintages from this estate, always reliable and exciting and quintessentially, the best that modern Italian wines can offer. We also showed the 2011 Le Serre Nuove, the 2nd wine of Ornellaia which is almost certainly the best vintage I have tasted of this wine yet: concentrated, firm and highly polished and shows the richness and depth of a great vintage. I tasted Ornellaia 2011 straight afterwards. What a wine! Already shows very well, with a dominance of ripe black fruits, proper structure and elegance. This is the kind of wine that the Grand Crus of Bordeaux wish they could produce every year.

Tua Rita was next up, and I was pleased to see the soon-to-be-released 2013 Tierra Rosso, which is a blend of Merlot and Alicante Bouschet with no oak. This wine is a lesson in how to produce fruit forward wines with pleasing fruit and style. I followed this with the Grandi Vini from the estate of Giusto di Notri 2011 and Redigaffi 2011. World class. 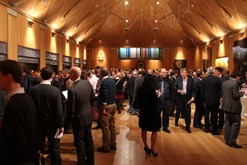 Giacomo Fenocchio is our ‘under-the-radar’ Barolo producer who is making a superb range of Barolos. On show, amongst others, were the new releases of his 2010s. This is one of my favourite vintages in recent years: a classic year with a long growing season, cooler than 2009 and 2007; tannins are fully formed but very present. It is such a delight to taste all three of the Cru wines together, showing the stylistic differences between the communes and the individual terroirs: Cannubi (from the commune of Barolo) 2010 is soft and warm and has delightful sweet red fruits; Villero showed the earthy minerality that is typical of Castiglione Falletto, supported by firm tannin and savouriness on the finish. The star of the three, however, for me, was Bussia (Monforte d’Alba) 2010: masculine, but controlled and confident.

Next in line in Piedmont was Bruno Giacosa. Behind the table was Bruno’s daughter, Bruna who is now in charge of running this legendary producer. Even though I have already tasted them on several occasions, I couldn’t resist tasting this year’s releases. Barbaresco Santo Stefano 2011 was elegant and perfumed but actually quite rich on the palate. If I were to use a Burgundy analogy here, Santo Stefano would be a top Cru from Morey St Denis. Next was the 2008 Barolo Rocche del Falletto Riserva. Giacosa only makes their Riservas in great years and the 2008 is certainly that. A profound nose: intense but controlled and compact, perhaps less flamboyant than the 2007, but this vintage is probably more typical of the Giacosa style.

Now for the new producers. Tiberio is our new producer from Abruzzo. This region, perhaps more than any other, is the best source of great value wine from Italy. The Montepulciano d’Abruzzo is rich and satisfying with just the right level of tannin concentration and acidity to make it a complete wine. The Pecorino from the same producer is slightly earthy with a stoned fruit character, but with lots of body.

I am a great lover of the wines of Sicily: where else can you find an area which has such a wealth of interesting native grape varieties and can produce stunning wines at quite exceptional value? Pietradolce is rapidly becoming my favourite producer from this island. The reds are based on Nerello Mascalese: a variety which is a progeny of Sangiovese and shows similar sour cherry and wild berry notes, but here there is an added dimension of smoky minerality and power. Perhaps it is the ancient vines or the volcanic soil from Mt Etna, but there is definitely a characteristic all of their own in these wines. And not forgetting the awesome wine which is produced from old vine Carricante. The prominent American wine writer, James Suckling said this wine reminded him of Grand Cru Chablis Les Clos. Perhaps this is stretching it a bit, but the wine does have an intense minerality and amazing freshness.

There isn’t room enough to mention all our great estates here, but in summary, Masseria Li Veli from Puglia, La Staffa from Verdicchio country and Lunae from Liguria were my other highlights.

If you missed it, you missed out! Make sure you get this event in your diary for next year.

... look out for the video clip of the event coming soon!