Armit Wines Blog → Matetic Vineyards - An Audience with the Winemaker

We recently had the honour of three representatives from Matetic visiting us for a tasting of old vintages and new releases, including a barrel sample of their EQ Syrah 2012. Arturo Larraín, the general manager of Matetic, is well known in the office due to his regular trips to these shores. However, this time we also had the unique experience of trying their wines with both the winemaker (Julio Bastías, below) and founder of the estate (Jorge Matetic).

The tasting was led by Julio Bastías and he spoke about their project with refreshing enthusiasm and pride. Matetic estate lies between two appellations, Casablanca and San Antonio, and it was the difference in style between these two that Julio was keen to discuss. 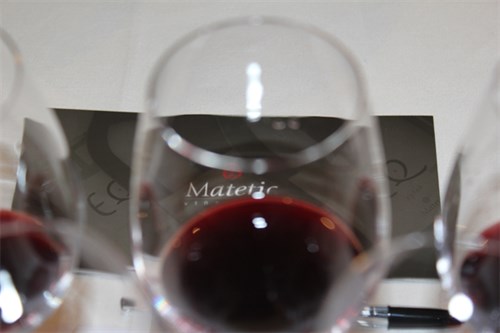 We tried a couple of wines grown from Valle Hermoso, their vineyard which sits closest to the sea, therefore enjoying the coolest weather within the estate. Like all Matetic vineyards, Valle Hermoso is certified organic and biodynamic. The grapes make up the EQ Coastal Sauvignon Blanc and EQ Pinot Noir. The cool breeze from the sea prevents the grapes from over ripening and ensures a refreshing fruit character and acidity that was apparent in both wines. The minerality of both wines, due to the granitic composition of the vineyard, was complemented by a complexity of fruit which only a cooling breeze from the sea can create during the ripening period for both varieties. The approachability of the EQ Pinot Noir 2011 at such a young age surprised me. In the past I have found that young EQ Pinot Noir has needed more time to evolve in the bottle, however this was drinking superbly already. Both the wines were showing very well and you could see why the Matetic team looked confident in front of a positive reception from our team.

We also had the opportunity to try a range of Syrah within their catalogue which included the Corralillo Syrah 2011, EQ Syrah 2002, Matetic Syrah 2009, EQ Syrah 2011 and finally, a barrel sample from their EQ Syrah 2012. It was a fascinating experience to see the difference in style over the years and how the winery has evolved. I’m particularly impressed by the direction of the estate, represented by the quality of their new vintages. The EQ Syrah 2012 was a barrel sample; however it already displayed great complexity with luscious orange peel notes, aromatic violets, towering tannins and a little cocoa. A very exciting beginning to this wine.

Julio has been at the estate since 2002 but only took over as head winemaker for Corralillo in 2008 and for EQ in 2011, after a few years spent in Napa Valley, California. The EQ Syrah 2011 and 2012 in my opinion are a class above their already high scoring back vintages.

It is always an enthralling experience to taste wines with the winemaker and this was no different. We ended the session with a viewing of their latest video which takes you around the vineyards and emphasises the culture at Matetic. A riveting watch, but all the better for having the team on hand to talk to us in person and bring it all to life!