I was back in Piedmont last week. With snow on the ground, bright sunshine and blue sky overhead and the Alps soaring in the background, I felt I got the better end of the swap for an overcast London. The locals were in particularly animated mood, the elections delivering a level of chaos that leaves even seasoned Italian political observers at a loss as to what happens next. 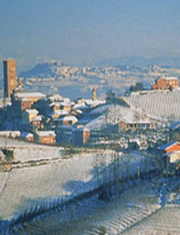 If there’s one man who could sort out the mess, it’s Angelo Gaja. Angelo is an inspirational figure and rightly revered but he also has that amazing ability to give his time generously, whether it’s greeting waiters and kitchen staff in the local trattorie, market stall holders in Alba or his visiting importers. He is totally in command of his brief, knows exactly what he wants and how to get it and yet carries people with him on his journey, rather than climbing all over them to get to the top. The locals have nothing but praise for the man. 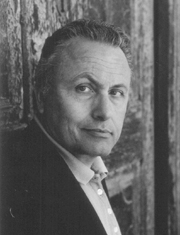 I was there to taste some of his latest wines and have a good catch-up. I arrived into Alba in the early evening and we met for dinner. Angelo knows his way around Alba pretty well. He marched off down a back street, which I assumed was a short-cut, and turned into a small, grubby courtyard, replete with cement mixer and wheelbarrows, through a temporary door and into an unexpectedly plush restaurant. Warm greetings followed. “Where are we?” I enquired. “Just a good local place that I like coming to” came the response, “it’s the sort of place that tourists don’t find but all the locals know”. Proving the point, I was then introduced to the head chef of Piazza Duomo, Alba’s only 3-star restaurant, who had come here for good food on his night off. 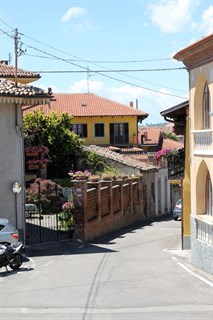 I let Angelo choose the wine, interested to see what would appeal to him. He plumped for Bruno Giacosa’s Barolo Falletto 2001. It was a fine choice, the wine in a beautiful place right now and we both agreed that 2001 is clearly emerging as the best of the vintages at the turn of the century. 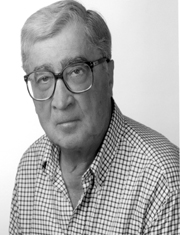 As good wine does, it enabled our conversation to naturally meander through many topics. Angelo’s choice of a Giacosa wine wasn’t by accident and he recounted many a story of Bruno from his early years. There can’t be too many people who inspire awe in Angelo but Bruno is one of them. He spoke with great warmth and affection, yet total professional admiration, of Bruno’s ability to pick the best fruit at harvest time. Long after Angelo had made the decision that the Gaja wines would be made 100% from grapes from their own vineyards, he would still go to the market to see the growers, to see what was going on. Every time he tasted some fruit that he found particularly good, his polite enquiry would be greeted with “already sold- Bruno”. Little wonder that he decided that his future lay in using his own fruit.
The next day I tasted the 2010 Barbaresco and single vineyard wines, which are yet to be bottled. You’ll hear a lot more about them later in the year, I promise! What I can tell you is that I am totally delighted that my son is a 2010 boy as it will give us plenty of excuse to enjoy these phenomenal wines in the decades to come. I also tasted the 2008s from Angelo’s Montalcino property, Pieve di Santa Restituta, which we have just released (see here) and these were on fine form too, showing focus, purity and delineation after the exuberance of the 2007s last year.

The tasting was completed by the three Baroli- Dagromis 2008, Conteisa 2009 and Sperss 2009. All will be released in the Spring. Last year (see here), I was enthralled by Conteisa but on this tasting it was the Sperss that won me over. 2009 is a very warm vintage and from this showing, it has brought out the hedonist in this great Serralunga d’Alba cru. Rather than attempt to explain while standing in the tasting room, Angelo suggested that we jump in the car and go there instead, Serralunga being about 15-20 minutes from Barbaresco. Understanding great wine is always easier when you can see where it comes from and like Giacosa’s great Falletto, which we had so enjoyed 12 hours earlier, Sperss (the Piedmontese word for nostalgia) comes from vines grown on steep slopes at around 350m altitude, in a perfectly-sited ampitheatre the heart of which faces due south. When you see it, it’s not difficult to understand why it’s a superior site that produces a remarkable wine. The story of its acquisition, however, and its naming is too good not to share.
Angelo’s father Giovanni spent his student years in Turin. At harvest time, his mother, Clotilde Rey, who wasn’t someone to mess with, summoned him back to Barbaresco to help for a whole month. Initially his tutors were rather put out by this but one visit from Mrs Gaja Snr and the debate soon petered out. Giovanni was made to work hard in the vineyards but rather than being allowed to enjoy the evenings with the other young men and women following his hard day’s work, Clotilde Rey ensured that he was tucked up in bed by 9pm. This carried on for 2 weeks and for years in succession. Being a good lad, Giovanni abided by the rules of course but he was also looking forward to the second 2 weeks helping some family friends in Serralunga d’Alba with their harvest. There, away from the watchful eye of Clotilde Rey, Giovanni was able to be like everyone else. Little wonder that he developed a great affection for the place and had such fond memories of it. 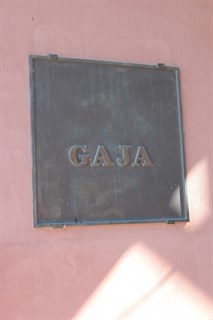 And so, many years later, when Angelo was told that there was vineyard for sale in Serralunga d’Alba, he didn’t hesitate. By the following evening, he had signed the documents and become the owner of an important slice of one of the greatest crus in Piedmont. It was a lot of money to be spending with so little time spent investigating what he was buying but Angelo knew from his father how great the vineyard would be and he named the wine to be produced from it Sperss in memory of his father’s time there.
Telling his father of the acquisition was obviously an immense joy to Angelo. But even more special, in some ways, was to get the nod of the maestro. A few weeks later, Angelo went to see Bruno Giacosa. As ever, Angelo talked a lot and Bruno said very little but of course he knew what Angelo had been up to. Seeking his approval, Angelo asked him about the vineyard, perhaps still doubting that his decision might have been driven more by rashness and the emotional draw of his father’s stories. “In years to come”, Bruno said, “you will see from the grapes that you grow there, just how great that vineyard is”.
The 2009 vintage will be released in the Spring. In the meantime, we can offer you:
1999 Sperss @ £750 per six IB
“This Sperss offers outstanding potential for those who are patient enough to wait at least a few years. It should drink well until at least age 25. 95 points, drink after 2011, Antonio Galloni March 2006”
2000 Sperss @ £660 per six IB
“Layers of dark fruit, grilled herbs, cassis and smoke saturate the palate in this powerful, stunningly beautiful Sperss” Drink 2015-30 94 points, Antonio Galloni, The Wine Advocate #195
2005 Sperss MAGNUMS @ £695 per three IB
“The 2005 Sperss is simply gorgeous in its layers of super-ripe black fruit, smoke, licorice, French oak, new leather and spice” Drink 2012-22 93 points, Antonio Galloni, The Wine Advocate #182
2008 Sperss @ £730 per six IB
“In time, the 2008 Sperss will be yet another viscerally thrilling wine…These new releases, the 2008 reds from Barolo in particular, are insanely beautiful” Drink 2018-48. 96+ points, Antonio Galloni, The Wine Advocate #200
Blog by Mike Laing
SHOW CATEGORIES