Last Monday night, a small group of friends and colleagues met up for a special dinner at 28-50 Maddox Street, in celebration of the life of the late and much-missed Patrick Bize. The brief was simple: bring a bottle of Bize wine with you that you would like to share with other followers of the Domaine.

I wrote a piece about Patrick following his tragic death in October of last year. Never a man at comfort with flamboyance and displays of ego, I hope he would have appreciated our simple gathering. No formality, just bottles placed on the table to be passed around, to let the wine do its work. Sure enough the stories started to emerge, with plenty of fond reminiscence of tasting in the Savigny cellars, meals around the kitchen table, jokes and pranks and much else besides.

The story which sticks most in the mind though came from a man who is widely recognised as London's most successful restaurateur of his generation, Nigel Platts-Martin. The creator of the hugely influential Chez Bruce, The Ledbury and The Square to name but three, Nigel is a modern-day hero for London gastronomes and one of a select few who can take credit for pushing the London restaurant scene into a position which is second to none today. But in 1984, Nigel was just another Briton on his way down to the South of France and as so many do, he overnighted in Beaune. It was there, he said, in a restaurant off the ring road, that a 1979 Savigny les Beaune 1er cru Les Marconnets from Domaine Simon Bize so captured him that it would set him on a path that has earnt michelin stars and offered untold pleasures to thousands of lucky diners in the last couple of decades. As regulars at his restaurants will know, the brilliance of the food is only matched by the depth and quality of the wine lists.

Nigel and Patrick both share great attention to detail in their work, surely the secret to upholding quality over the long term, alongside the burning passion for the activity in question. But Nigel's one regret, he said, was never to have told Patrick that it was one of his wines that had provided his Road to Damascus moment and changed his life for ever. Hearing him recall the moment, describe the flavours that had so startled him, it was as if he was back in that restaurant in Beaune, savouring this magical wine for the first time. 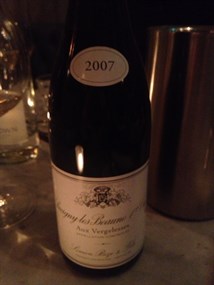 The evening was dominated by Patrick's reds but we started proceedings with some whites, with the 2011 Savigny les Beaune Blanc 1er cru Les Vergelesses already delicious, as so many 2011s currently are. Most of the table actually preferred it to one of the rarest wines Patrick ever released, a 2002 Chevalier Montrachet. This wine had been made from purchased grapes but only enough to fill one barrel. My friend who brought it with him purchased a full case originally and previous bottles had been much better, he said. There was no fault in the wine but it was somewhat flat. Perhaps just having an off-day, we ventured: after all, we all have them from time to time. Alternatively, if the wine was simply beginning its decline, much better to find that out with the final bottles in the case than the first ones. 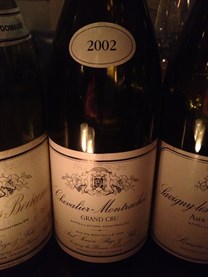 Despite the simple brief referred to at the beginning, there is always one...a friend who works for one of the major auction houses brought along a magnificent magnum of 1999 Chevalier Montrachet, Henri Boillot. It was a beautiful bottle and a very generous addition to the table which was much enjoyed but the inability to follow instructions needed explaining! The reason, he said, is that there were simply no Bize wines at his place of work. In a way, this was great news- Patrick's wines had always been made to be drunk and enjoyed rather than be traded as trophies. The scarcity of older bottles on the secondary market is purely a reflection of the fact that corks have been pulled, rather than because they are sitting in a bonded warehouse waiting for the auctioneers gavel. 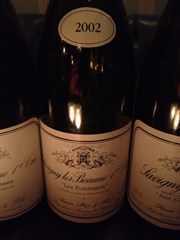 Of the younger vintages, we enjoyed a couple of bottles of Savigny les Beaune 1er cru Les Vergelesses 2007, the vineyard for which Patrick was best known. Even in a so-called lighter vintage, Patrick had put in a strong performance and this wine really needed another couple of years to reach prime-time, in contrast to many other 2007s that I have tasted which are currently good to go. There was also a bottle of Savigny les Beaune 1er cru Aux Guettes 2010 which showed tremendous potential in what is unquestionably a top-rate vintage.

I had taken a punt with my wine, having clapped eyes on a lonely bottle of Savigny les Beaune 1983 with good fill levels and a promising colour. There is a famous saying that when it comes to old wine, there is no such thing as great vintages, only great bottles. No one would pretend that 1983 was a top-rank vintage but this was one of the bottles that, happily for me, punched above its weight. As a village wine of 31 years of age, its delicacy was to be expected but as the evening progressed it put on weight and showed a charming array of flavours, ranging from dried red fruits, to spices, autumn leaves and an earthy gaminess. Quite delicious. 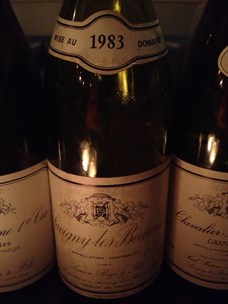 We finished with a memorable bottle from further east, a  Riesling Clos Sainte Hune Vendanges Tardives 1989 from Trimbach that was absolutely at its peak and unlikely to improve further. Throughout the evening, we had all enjoyed the simplicity of the 28-50 menu, one that concentrates on the quality of the ingredients but prepared with low levels of fuss, the ideal partner for such an array of wines. The service was attentive as ever, if you haven't tried 28-50, I heartily recommend that you do so.

Off into the night we then went. We had duly toasted Patrick and his wines and had reflected on a life that had bought so much pleasure to us all. His body of work, his wines, may still be largely ignored by auctioneers but hearing of the inspiration that they had given to a great restaurateur seemed totally in keeping, for these are bottles that have delighted so many Burgundy-lovers over the years. Once again, on a cold January evening, they had worked their magic, so proving again that in Burgundy, if you know your growers, you will never go too far wrong. Repose en paix, cher Patrick.