“At the foot of the Mountain”

Piedmont, in the far north-west of Italy, is easily among the world's very finest wine regions. It is the home of more appellations than any other Italian region, including the prestigious Barolo and Barbaresco. 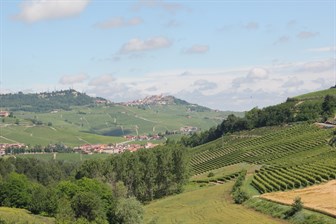 Piedmont sits at the foot of the Western Alps – the name Piemonte meaning 'the foot of the mountains' – which encircling it from the North and West, forming a natural border with France.

The Alps are of great significance in Piedmont as they are largely responsible for the region's favourable climate, providing a rain shield from the worst of the weather and helping form the rolling topography of the region. Whilst the Alps historically protected the Piemontese from invasion it was the invasion of the Romans and then the French that heralded the start of proper viticulture and eventually advanced winemaking techniques. Although they may be loath to admit it, the proximity to France has historically given the Piemontese much more advanced oenological practices and could be viewed as one of the reasons for why it stands at the pinnacle of Italian fine wine. Of course Tuscany may disagree!

This relationship with France has often led to Piedmont being described as the 'Burgundy' of Italy, a link drawn due to their focus upon one grape (Nebbiolo and Pinot Noir respectively) and due to the prominence of small, family run wineries. The similarities in the grapes; tannins, acidity, light colour, minerality and longevity, certainly warrants a comparison. Combined with the two regions reputation for some of Europe’s finest foods, it is easy to see the parallels. We wouldn’t like to choose between them but both offer unique and highly memorable food and wine experiences. 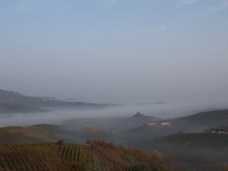 The mountain range we are referring to being the Alps which almost provide a full circle around this revered region. During the Summer and Autumn this circle forms a continuous dark horizon and in the Winter and Spring, a sparkly white one.

Less than 5% of Piedmont’s vineyards are officially classified as flat. The slopes form a true example of diversity, facing different directions and at different aspects; a mosaic of vineyards amongst rolling hills. This amalgamation of vineyards, make for a wide variety of microclimates within a stone’s throw. The region as a whole however, has a macroclimate that can be identified as a warm growing season, followed by a misty autumn and cold, foggy winter. The warmth is tempered by the altitude and cool winds

During harvest, the region is a magical sight. Copper and gold coloured vines weave amongst the peach tree and hazel bushes (for Nutella), and lead down to the valley of the Tanaro, usually drowned in fog. The dark grapes ready for picking form a lovely contrast with the light, ethereal mist. 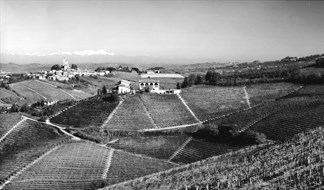 There are several important viticultural factors in Piedmont which account for the unique nature of Piedmontese wines. Alongside variations in microclimate and altitude, the types of soils really have a pivotal influence on the final wine we see in the glass. If you think of the diverse style of wines produced in the Piedmont from light, delicate and floral Moscato, to rich, dense and tannic Barolos and everything in between, soil really does contribute to their defining character and ultimate style.

The general composition of the soil in the area is largely calcium-rich marl, sand, and clay but there are variations depending on the desired styles of wine.

The dominant soil that contributes to the fine wines of Barolo and Barbaresco is calcareous marl which is a lime-rich clay-based soil. The lime in the soils play a part in ensuring the soil is more alkaline which interestingly has the opposite effect on the vine, producing grapes which are more acidic. Acidity is of paramount importance in providing a back bone for the ageing of these long lived Nebbiolo wines. A difference to note between the two though is that the soils of Barbaresco are much richer in nutrients meaning the vines don’t produce as much tannin compared with those of Barolo.  The soil make-up of Barolo and Barbaresco is quite complex and there are many variations depending on the Ccru and the site location all giving further character and sense of place.

The Barbera grape common to both Alba and Asti regions really thrive in the chalky, limestone-rich clay soils there. The limestone soil here, as in the Barolos and Barbarescos is responsible for the high acidity nature of these wines. Ultimately it helps produce a softer wine with less body than the likes of Barolo and Barbaresco and very high acidity.

The Moscato grape thrives on clay and marl limestone mixed with sandy veins soils to a produce the light, aromatic and floral wines of Moscato d’Asti.

The soils here are chalk-clay hills where the Cortese grape thrives to produce the elegant and fresh whites that go into making Gavi in the far southeast corner of Piedmont. It’ is often why Gavi can be referred to as the ‘Chablis of Italy’ to due to the chalky minerality which can be attributed to the nature of the soils on which the vines are grown.

When it comes to discussing stylistic differences in wines, you need look no further than Barolo. Since the late 1970s, producers of the region started changing their winemaking techniques, leading to the ‘Traditionalist/Modernist’ debate.  Originally, Barolo underwent a maceration time of 15-30 days and was then aged in old neutral botte, usually made of Slavonian oak, before needing an extremely long amount of bottle ageing in order for the tannins to soften.  Angelo Gaja was instrumental to introducing to the region the age of wines in French barriques.  Maceration times were shortened to 7-10 days before being aged in smaller barrels.  These new techniques and the addition modern technology in the winery, including rotofermentors, allowed the wine to be approachable at a much younger age.

"In the traditional manner of viticulture, you had to leave the wine in large casks for five to seven years to try to soften the harsh tannins," explains Gaia (daughter of Angelo Gaja), "but with healthy, perfectly matured grapes, that was no longer necessary."

Initially, there was a definitive divide between producers whose wines were produced in the tradition style and those that were in the modern style.  Over the years, this divide has narrowed greatly and you will now find many producers in the region using both styles of techniques in the vineyard and the winery.

Fenocchio is definitely of the ‘traditionalist’ camp with the Barolo wines from the estate being made with a lengthy period of skin contact during fermentation, never less than ten days, and without the use of rotary fermentation tanks.  The wines are aged for five months in stainless steel tanks and two years in Slavonian oak casks, some as large as fifty hectolitres, and is then given an additional year of bottle aging. No use whatsoever is made of small oak barrels.

Although Gaja is the father of the ‘modernist’ movement, he never completely abandoned some of the traditional techniques.  Botte can be seen next to French barriques in the winery.