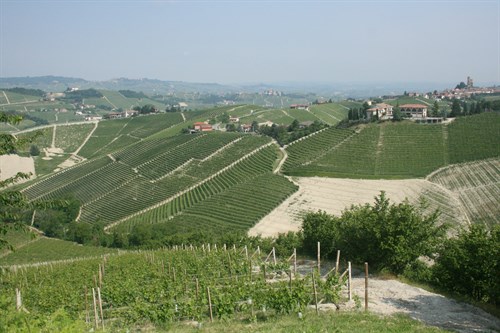 In glorious sunshine, following a week of rain, the region was verdant, bright and captivating. It remains one of my favourite places in the world and although the Spring is sadly not the time for truffles, it is definitely the time to see the landscape in its full glory. 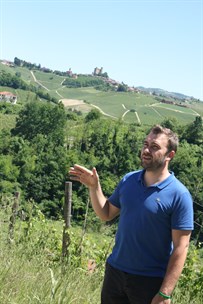 First up was Luca Roagna, who greeted us at his brand new cellar in Castiglione Falletto just above his holdings in the cru of Pira. Luca is a true enthusiast and needed no invitation to whisk us into the vineyards to demonstrate his work. Straight away we could appreciate that the quality of his wines is driven by the vineyard work.

Topics for discussion included soil strata, biodiversity (Luca deliberately encourages over 100 types of different grasses and legumes to grow between the rows), training methods, selection of vine material and much, much more.

So enthralled were we that we scarcely left enough time to taste but after a tour of his astonishing new cellars, Luca treated us to a full run through of his 2009s from his old vine selections (all over 50 years old) ending with the latest vintage (2005) of his celebrated Crichet Pajé.

The definition of vineyards was crystal clear between each one with Luca’s traditional and patient approach to vinification and elevage given the wines full time to express themselves. But there is plenty of reward for those with cellars and restraint too! Terrific wines that will appeal to the purists in particular.

The following morning began in Barbaresco, where the influence of the Gaja family on this small community cannot be overestimated. We started in the vineyards, admiring the perfect position of Sori San Lorenzo while learning in great detail about the viticultural regime with everything from production of compost, bee-keeping, the density of vine plantings and variety of grasses being fully explored. It is not by chance that this estate enjoys its position right at the top of the quality pyramid. There is a thoughtfulness and respect about every aspect of the work with constant fine-tuning going on and no expense spared. 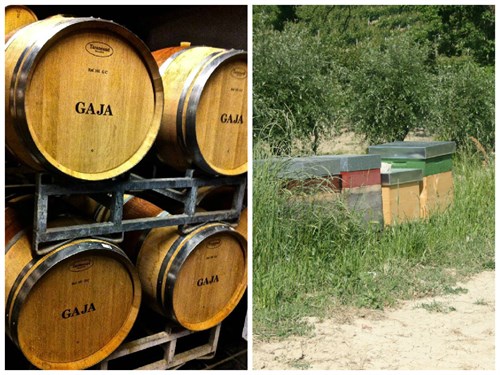 In the cellars it is no different, all of the parcels being vinified separately, put into barriques for the first year and then blended together before transfer to the large botte for further ageing. At any stage, if a wine is not up to the mark, it gets taken out. Our tasting focused on the forthcoming releases. Stealing the show were the 2011 Barolo- Dagromis, Conteisa and Sperss. There is an immediacy to these wines that makes them an utter joy to taste and no need to reserve judgement yet they will age gracefully for many years to come. After the (justified) excitement of the 2010 vintage, these have big shoes to fill but they do so with aplomb.

From Barbaresco to Barolo and a new visit for me - Barale Fratelli. Tasting the Barolos of Barale in Barolo always promised to be fun and the charming Eleanora Barale gave us a first-class visit, obviously proud of her family’s heritage, established in Barolo since 1870. A full offer of these wines will follow but with the quality so obvious, we were staggered to learn that they had never sold a bottle in the UK before, with Italy, the USA and Scandinavia their traditional markets. With holdings in the crus of Castellero, Cannubi and Bussia as well as Serraboella in Barbaresco, this is a serious estate, fully organic since 2012 and using traditional methods in the cellar. After the run through the generics, including a very good and excellent value Langhe Nebbiolo, we tasted the 2011s which Eleonora believes to be a more elegant vintage following the excellent but structured 2010s. She wouldn’t be the only one to say that the warmer years (like 1997, 2000, 2007 and 2011) often produce the best results. 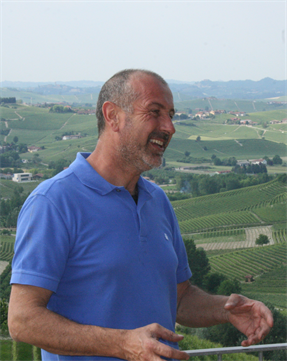 To Bussia next and the ever-smiling Claudio Fenocchio, no longer under the radar since his standout 2010s captured widespread acclaim but who remains with his feet firmly on the ground and fully aware that you are only ever one vintage away from hardship. This is a gem of an estate, managed with great skill and another who has been moving towards organic and ‘biological’ methods over recent years. We tasted the 2012s from botte which Claudio was very pleased with and rightly so, as they display the different vineyards with great clarity. Most enlightening though was the opportunity to taste his experimental cuvée of his Bussia Riserva 2008, macerated for 90 days following the methods of his father and grandfather. We were stunned to see that the tannins displayed a silkiness and smoothness above even the level of the ‘regular’ Riserva. Claudio confirmed that future Riservas will all follow this method, beginning with the 2010. Make a note for your purchasing book because that is a truly spectacular wine…

Our final morning was spent with Giacosa. To the vineyards first, where Francesco Versio explained with great patience the characteristics of the different parts of the Falletto vineyard in Serralunga d’Alba. This great site has yielded some of the region’s most celebrated wines and there is no better way to understand why than by standing in it and observing it. Holding that picture in our heads, we raced back to Neive to tour the cellars and then to taste with Francesco and Bruna Giacosa. What followed was a simply spectacular tasting with too many highlights to mention. We started with the two Spumante, comfortably the best in the region and arguably in the whole of Italy if given time to develop in bottle. Of the generics, the Roero Arneis 2014 is another excellent vintage - Giacosa is a real master of this variety. Also showing really well was the 2013 Nebbiolo Valmaggiore - 2013 is clearly a very strong vintage for Nebbiolo in the region as a whole. But it was 2011 that again provided the fireworks: Santo Stefano, Falletto and the Asili Riserva were as good as you can hope for. Over lunch at the legendary Il Ciau del Tornovento, Bruna revealed that in the view of her father and herself, they believe that 2011 is one of their greatest ever vintages and from this tasting, it is impossible to disagree.

With time running against us, we just made it to Turin Airport in time to catch the last flight to Gatwick. A terrific couple of days that reaffirmed again quite how special Piedmont is and how unique its wines are.