In the modern era, Pietradolce was started in 2005 by Michele Faro, but two generations ago his grandfather was a grape grower and producer in Etna, working with only 1 hectare and selling his wine in bulk. Michele recognized the potential in the area and has acquired very old parcels of vines on the more favourable northern slopes of Etna.

Northern slopes (in the northern hemisphere) are not normally the favoured side, but here, due to wide diurnal range of 15 degrees at night up to 35 degrees in the day means that they get the slow, aromatic development without heat stress. This is why Etna is called the ‘Burgundy’ of Italy.

The estate is now 11 hectares. The oldest vineyards are those of Carricante, 120 years old. Vigna Barbagalli is also planted with pre-phylloxera vines of 90 – 100 years old. The younger vines planted in 2005 go into the Pietradolce Rosso. Interestingly, there is no phylloxera this high up in Etna, so everything is planted on their own roots. Modern viticulture in Etna is mostly with Spalliera training, which is one cane. However, Michele is sticking to the old system of Alberello, even for the new plantings: low-lying bush vines, which he reckons is the best method in Etna, even though everything has to be done by hand. This produces a maximum of 1 kilo of grapes per vine. 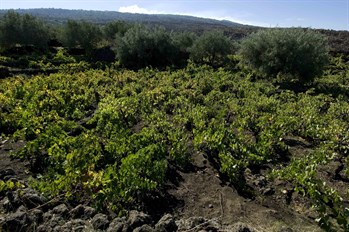 The vineyards on Etna are all terraced. Some of the oldest vineyards are just a few metres wide. At Pietradolce they only use the traditional varieties of Carricante for white and Nerello Mascalese for red. However, there is a little Nerello Cappuccio mixed in with the Mascalese. Michele doesn’t particularly favour this variety, calling it ‘rude’, whereas he describes Mascalese as fine and elegant.

The soil, obviously being grown on the side of Europe’s most active volcano, is largely volcanic in origin with stones and some sand. Due to the elevation here, at Pietradolce, it is largely free from fungal attack. There will be a small amount of oidia and peronospera, but all that is required is two organic sprays per year, that’s it. They work organically, but nothing official as Michele doesn’t want to get involved with the Italian bureaucracy. 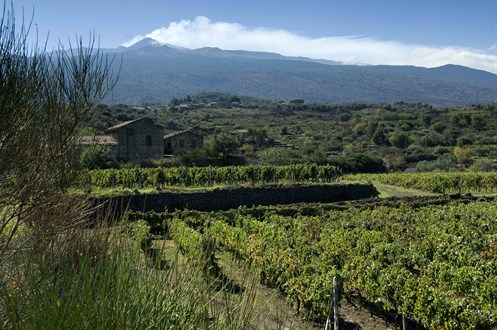 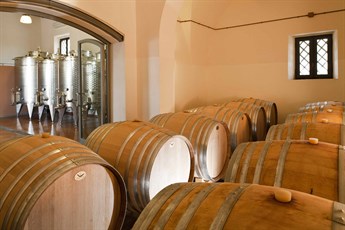 Fermentations take place in conical steel vats. The white and rosé do not have any wood. The Pietradolce Rosso spends three months in French Tonneaux (500L). Archineri spends 11 months in the barrel and Vigna Barbagalli spends 14 months. They use old barrels, largely, but buy 10-15% new barrels each year. They do not like barriques. Michele was keen to stress that barriques are not suitable for Etna’s wines.

Specifically about the rosé, Michele is keen to make a wine that is suitable for food with some complexity and body. He also points out that there is no prior grape selection for what goes into the rosé. They use 1st quality grapes which spend only 4 – 5 hours in the press followed by a very short maceration just for colour and to extract a little body. He doesn’t want to make a ‘swimming pool’ wine. His words.