I should have written this post some weeks ago, as time flies, but nevertheless the memory about that amazing evening is still so vivid that I can perfectly recall the dinner at Matsuri on 26th March, where matching Japanese food with Querciabella wines was the theme. The wines of Querciabella need no introduction: biodynamic since 2000 the company ranks among the best wineries in Tuscany, producing iconic wines like Chianti Classico, Batàr, Camartina and Palafreno.

Matsuri is one of the most famous Japanese restaurants in London, just next to Green Park station. Famous for its Teppan-yaki cuisine, it brings to Londoners fresh food, fish, vegetables and meat from Scotland and Australia cooked at the diners’ table. We started the dinner at around 8pm and we were a small circle of 15 people: the perfect number to enjoy a meal exchanging our opinions. At the reception we were greeted by the skilful Sicilian sommelier Riccardo Guzzardo who offered us a typical Japanese aperitif: Koshu of Suntory wines blended with Brut Champagne to match the typical sweetness of the Japanese variety. A drink that the Japanese guests (the majority of our group) drank satisfactorily, but which the European guests may have found strange, too sweet for drinking before actually starting to eat. I enjoyed it and with a little bit of pride I have to say I recognized the Koshu straight away for its stone fruits character, peach aromas/flavours and its extreme acidity: an ethereal wine which has a very different taste from ours, although Koshu is 95% Vitis Vinifera vine.

It was then the turn of Giorgio Fragiacomo of Querciabella to open the dances. He masterfullly and entertainingly described to us the company’s philosophy and introduced the wines produced by the Tuscan estate. The most interesting experiment of the evening was the brave match of a red wine with tuna fish he had already tried successfully in the USA.

Before telling you the results though, I must say we were delighted with the current vintage of Batàr: the 2011. As we all know this is a blend of Chardonnay and Pinot Blanc with his distinctive creaminess given by fermentation in barriques with frequent bâtonnages and one year ageing in French wood. This first white wine was a perfect match with assorted tempura (Prawn & Nori, Squid & Oba Leave, Seasonal Vegetables) enriched with a ginger sauce that balanced the final acidity of the wine. Side to side with this we were offered a glass of the new-born wine called Turpino, a blend of Cabernet Franc, Syrah and Merlot in the 2010 vintage. And here lies the discovery! 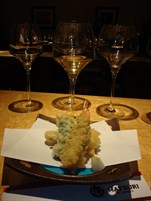 A beautiful nose of red fruits, very intense and charming, juicy, was working well in combination with Assorted Sushi (Tuna, Rich Marble Tuna, Yellowtail & Special Tuna Roll). Everybody found this pairing adventurous and brave against the classical cliché that fish goes well only with white wines! I personally think that the lightness of the wine did not overpower the fish at all but enhanced it instead, and in fact the majority of the people liked this type of unusual matching.

The following dish was black cod marinated in ginger and the wine paired was a sublime Batàr 2007: a rich, evolved wine with an intense gold colour and nuances of vanilla. It was a very different wine, almost exotic in its aromas/flavours; still surprisingly alive and with a strong minerality.

The last two dishes: Spicy Fried Rice and Australian Wagyu Beef Sirloin Steak were paired with two vintages of the iconic Camartina (Cabernet Sauvignon 70% and Sangiovese 30%): 2010 and 2004. Both amazing wines...fresh and young, but powerful the first;  elegant, velvety and mature the second one with a final spiciness lingering in the mouth and showing how this fine wine married so well with that steak.

Before finishing with the dessert, I would like to spend some words on the superb chefs who entertained us with fire stunts and plays of colours while cooking in front of us, above all enjoying themselves with the creation of their dishes!

What else to say? It was an amazing dinner where all the diners were taken care of and served with professionalism and joy. The dessert, which is the part I enjoy secretly the most, was a green tea tiramisu with hojicha ice-cream: a surprise so delicate and refreshing, served with a delicious plum wine, sweet but not sticky, with strong almond kernel aromas and ending with a sharp acidity that managed to leave the palate cleansed and ready to start the great dinner again... This was a worthy end to a well-respected meal with the incomparable Querciabella wines and I have thoroughly enjoyed the evening tuning myself with the shy Japanese staff who, before leaving, even taught me how to say ‘cheers’, so KANPAI!