What a delight the diners of the City of London were treated to earlier this month at the Planet of the Grapes of Bow Lane. Not one, but two members of the Incisa della Rocchetta family were in attendance to present their spectacular wines to guests.

Priscilla Incisa della Rocchetta is the granddaughter of Mario Incisa della Rocchetta, the founder of Tenuta San Guido: the man who, more than anyone else, is responsible for the renaissance in quality Italian wine in the latter part of the 20th century. Priscilla presented two vintages of Sassicaia; 2005 & 2010 served with a stunning dish of wild boar. The 2005 was very restrained and elegant with just a hint of dry tannins which are still yet to resolve. The 2010 is still a baby, but was firing on absolutely all cylinders on the night. Its aromatics filled the mouth and the inky tannins carried the flavours for 30 seconds or more on the finish.  To follow this, with a selection of Italian cheeses we had the Le Difese 2011 from magnum format and Guidalberto 2011 from bottle. Both showed well, but the mid-palate texture and generosity of the Guidalberto impressed me the most. 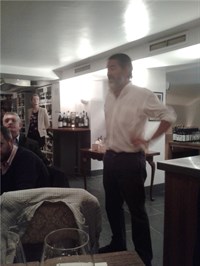 Sebastiano Rosa, one-time winemaker at Tenuta San Guido and various other fine producers in Tuscany is now fully ensconced at the estate of Agricola Punica, a joint venture between San Guido and Sardinia’s leading co-operative Santadi. Sebastiano, passionately and entertainingly, told us of the climate, history and viticulture of Sardinia and talked us through his three wines. Samas is his exciting new white made from Vermentino and a little Chardonnay. This is an aromatic and quite punchy white from the sandy soils of the Sulcis peninsula at the South –Western tip of the island. We were also treated to his two reds: Montessu 2010 and Barrua 2010, reinforcing my opinion that these are some the most interesting and fascinating reds produced in Sardinia. Both contain a percentage of international varieties, but the main protagonist is the Carignano grape, which is perfectly adapted to the sunny climate and terroir of the area.

Stephane, the Breton Chef of Planet of the Grapes, did an exemplary job of creating local dishes, both Sardinian and Tuscan to match these world-beating wines, and hats off to Matt and the rest of the team at Planet of the Grapes for filling the restaurant with an interested and enthusiastic crowd who hung on every word of the guest speakers. I look forward to more dinners like this. A great success. 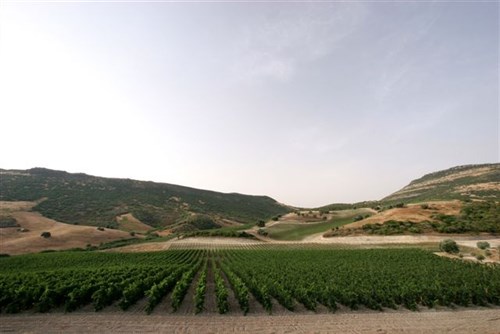