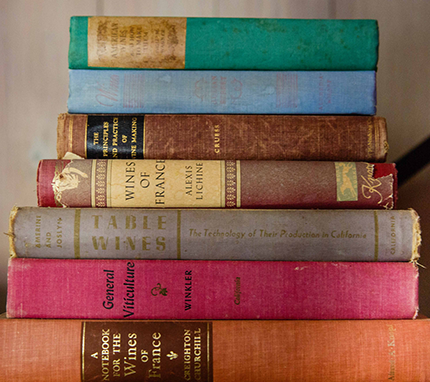 There are many tales of successful business people who step away from the boardroom to follow their passion for wine and apply their undoubted drive to tilling the land and tending vines. In 1948, paper magnate James David Zellerbach purchased 14 acres of private oak woodland on a steep hillside on the west side of the Mayacamas Range, overlooking the town of Sonoma. The trees went for timber and pulp and, in 1953, vines were planted, but retirement to hobby winemaking was not part of James Zellerbach’s strategy - he was more ambitious than that. “Some of my friends appear to believe that this winery is just a pastime business with me,” he said, “but in actuality, it is a serious business enterprise.”

After all, this was a man familiar with a grand project: he was one of the architects of the Marshall Plan to rebuild Europe and, at the same time as setting up his winery at home in California, he was travelling Europe in President Truman’s name enacting it. (In the 1950’s he was appointed US Ambassador to Italy, while still at the helm of Crown Zellerbach.) Throughout his European travels, and particularly in Burgundy, he also researched winemaking. On his return, he hired Napa viticulturist Ivan Schoch to plant Burgundy varieties Chardonnay and Pinot Noir, and winemaker Ralph Bradford Webb, who had a simple brief: make wine which is at least the match of the best in Europe. James Zellerbach also handed his architects a picture of 12th century press building at Clos de Vougeot as his briefing.

This team soon realised they had a chance to do more than ape Burgundy and pioneered the use of modern techniques which would come to define New World winemaking, such as the use of temperature-controlled stainless-steel fermenters, use of inert gas, control of malolactic fermentation and complete use of small French oak barrels.

Ownership has changed over the decades since the Ambassador’s death in 1963. First, his fellow Chevalier du Tastevin Mary Day then, in 1975, Australian-born Baroness Barbara de Brye. Since her passing, Alexander de Brye, who arrived in Sonoma as an infant with his mother, has kept the flame burning. And it does feel like that, because the founders still loom large. As Alexander says, “When one inherits such a seminal property as Hanzell Vineyard, the responsibility to continue the Ambassador’s dream for the land, the vineyards and the winery is profound.”

Continuity is certainly ensured by the winemakers. Succeeding Brad Webb during Mary Day’s ownership, Bob Sessions ran the winery (with Webb as consultant at first) between 1973 and 2001. Although he is retired and the director of winemaking now is Michael McNeill - who learnt his skills with Chardonnay and Pinot Noir in Burgundy, Oregon and at Chalone Vineyards in California’s Central Coast - Sessions remains as Winemaker Emeritus.

Constancy is also a factor in the Hanzell vineyards, where, for 35 years, José Ramos Esquivel has maintained what are believed to be the oldest vines in the Western Hemisphere, using sustainable methods drawn from organic, biodynamic and just plain healthy methodologies. Over the years, the Hanzell Vineyards Estate plantings have expanded from six to 46 acres, on both west-facing and east-facing slopes at high altitude on a saddle. The ground here is rocky (“the pickaxe is used more than the shovel”), well-drained and low in nutrients - challenging the vines to give their root systems a workout.

In the Hanzell winery, less is more for Michael McNeill and Alexander de Brye. For Hanzell Chardonnay, they are restrained in their use of French oak barrels and malolactic fermentation. With Hanzell Pinot Noir, fermentation is kept at cooler temperatures with an extended maceration, and a moderate use of oak barrels to build richness and allow the subtle complexities fruit to perform.

As is so often the case with the best estate winemakers, Hanzell Vineyards keeps its range to a minimum. The estate Hanzel Chardonnay bursts with bright aromas of pear, citrus, green papaya and Mediterranean flowers, along with softer brioche I am sweet spice notes which continue on the palate to balance the acidity. But there is also a salinity which gives way to mineral notes, expressive of the terroir. The initially taut mouthfeel relaxes into something richer when decanted, which is an indication of the propensity of this wine for aging - something which makes Hanzell Vineyards releases stand apart.

The estate Hanzel Pinot Noir has the combined sweet and savoury flavours of a fine game dinner in the autumn - with juniper berries, orange peel, cherries preserved in brandy and a mushroom umami layer to it. Dark and ripe fruits - black cherry, plum and blueberry - follow, with cocoa to finish. The tactile tannins make it clear that this is a long-lasting Sonoma wine in the cellar and it is a far cry from the instant-gratification fruit bombs common to California. The longevity of the estate is crucially demonstrated inside the bottles it releases. Both single varietal releases include fruit from the old growth vines in the original 1953 Vineyard.

Not everything is dictated by the Ambassador’s original plantings, however. Hanzell Vineyards’ second wines, Hanzell Sebella Chardonnay and Pinot Noir, are made from younger vines. While they are full of youthful exuberance and ready to drink now, they still carry the character of the Hanzell Vineyards estate and will also age well - making them excellent value. Armit Wines has exclusively imported these, along with the flagship wines, to the UK since 2010.

Hailed a curvy, racy beauty from Antonio Galloni and a fascinating wine from Monica Larner, Sassicaia 2017 is one of the most anticipated releases of the year. Sassicaia 2017 is a blend of 85% Cabernet Sauvignon and 15% Cabernet Franc. In her preview assessment of the wine, Larner describes incredibly well the tension existing from vintner and vintage and how, like...

An impressive release that speaks volume of the pedigree of Tenuta San Guido’s wines. Guidalberto is a blend of 60% Cabernet Sauvignon and 40% Merlot. A voluptuous nose charged with blackcurrant, black cherries, damson notes is rained in by mineral, almost balsamic hints of black olive, mint, tomato leaf and fresh black pepper. The exuberant nose of youth shouldn’t distract from the...

The third wine of the estate and one that was produced since 2003, Le Difese is a blend of 70% Cabernet Sauvignon and 30% Sangiovese. Fermentation takes place in stainless steel vats and it is then aged for 12 months in French and American oak barrels and for a further three months in the bottle. The younger addition to the...

“A darker, more structured Barolo than his sibling, Prapo’ is an incredibly pure expression of the terroir of Serralunga. Precise notes of red and black berries, forest floor and dark spices are framed by tight woven tannins and lively freshness. An exciting release that has the potential to be enjoyed for the next 10 years.” Armit Wines

A beautiful, floral core of violets and roses creates a very perfumed, elegant, classic and gentle aroma. Immediately appealing, the wine opens up on the palate to reveal spicy notes alongside delicate and attractive crunchy redcurrant and raspberry. The texture is silken and wild with broad, expansive and juicy density supported by fine tannins which leads to an earthy and...