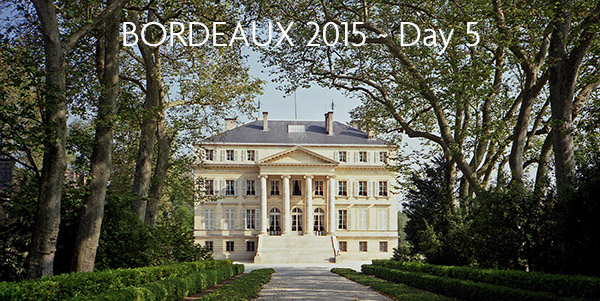 Stars of the Day
Latour ~ I have always admired it but in recent years, I have also found soulfulness here, for me a vital piece in the 'complete wine' jigsaw. This is as pure an expression of the variety as you can find and yet there is still tremendous finesse, it is relaxed, supremely balanced and endlessly fascinating. I loved it.
Lafite-Rothschild ~ A display of this noble grape at its very best. Inky, dense and pure on the nose, on the palate, there is tremendous pressure of tannins and concentration of fruit but it moves through with such aplomb that at no point do you see a seam or a join.
Pontet-Canet ~ The balance, harmony and relaxed approach make for a real point of difference with some of the more imposing wines of the neighbourhood.

After an intense week, our final day in Bordeaux had arrived. For many years now, we have the tradition of 'First Growth Friday'. We do this for a number of reasons. Firstly, we find it more logical to taste the top wines at the end of the week, thus putting them, and indeed all the wines of Bordeaux, into context more readily; secondly, it is almost always quieter as most EP tasters have already gone home meaning a more agreeable tasting experience; and thirdly, good things usually come to those who wait.

Good things did indeed come. Choosing between Margaux, Latour, Mouton-Rothschild and Lafite-Rothschild is never easy but I will attempt to summarise the key points of the experience below.

We arrived at Château Margaux in good time, with the new Lord Foster-designed cellars beckoning us in. The absence of the late Paul Pontallier to provide the welcome was something that we felt very keenly. Paul was always one of the people I most looked forward to seeing in Bordeaux, someone who was always generous with his time and his insights and who carried out his brief with tremendous skill. 2015, his 33rd and last vintage atMargaux, is a fantastic farewell to this transformational figure in the Château's illustrious history. We started withPavillon Rouge, a sumptuous, expressive wine of pure pleasure with a weightlessness to its tannins- a soft power. Thinking back to earlier vintages that I knew of this in the '90s, the wine is unrecognisable. It was by far the best second wine that we were to taste during the day.

The Grand Vin held itself back a little more, making us do the work. It offers a very classic profile, with Cabernet Sauvignon dominating the blend at 87%. Its deep textures, vibrancy and mineral depth point to a multi-layered wine that will unravel majestically in the years to come. Then to Pavillon Blanc, another wine transformed by Paul and head and shoulders above any other white in the Medoc, and indeed most of the Graves too. Its floral qualities (elderflower and lime blossoms), coupled to a saline finish and excellent freshness make it quite delectable. The great regret is the tiny quantity made.

Bordeaux's roads had one more trick for us, with the D2 flooded just south of Beychevelle thanks to the high tide, meaning a 25 minute detour around the back of Listrac and Moulis in order to get from Margaux to Pauillac. First Growths are not famously forgiving with tardiness but we found Jean Garandeau at Latour in a more relaxed mood than many of his counterparts and he lead us through a tasting of the Château's three 2015s as well as their most recent 'library' release.

In a stable of thoroughbreds, Latour is the true stallion. I have always admired it but in recent years, I have also found soulfullness here, for me a vital piece in the 'complete wine' jigsaw. Jean explained that it is the quality of the tannins that he finds particularly remarkable in 2015, a product of the extended ripening in cool conditions in September. At 97% Cabernet Sauvignon, this is as pure an expression of the variety as you can find and yet there is still tremendous finesse, the power of the wine channelled through to the finish effortlessly. At only 13 degrees alcohol, this is no blockbuster but it is relaxed, supremely balanced and endlessly fascinating. I loved it.

Regrettably, this may be the last that we see of it for 10-15 years, the Château having ceased to play the EP game since 2011. So we had to console ourselves with a chance to taste Pauillac de Latour 2010, Forts de Latour 2009 and Latour 2000. All three were brilliant in their own way with the Grand Vin more than living up to its lofty reputation. At 15 years old, it is just starting to motor and if you have it, don't hesitate to try it now...or at any time in the next 50 years.

We bade farewell to Jean and carried on north to Mouton Rothschild. A busy tasting room of visitors meant for an atmosphere somewhat less serene than at Latour but nonetheless, we set to the task. The Château presented 5 wines. The biggest surprise to me was the quality of Clerc Milon, a wine I have seldom been impressed by, including at the UGC on Wednesday, but this performance really raised it in my estimations. The Grand Vin is a sturdier and more robust than Latour and at the moment, does not offer the same finesse, subtlety and control. The pedigree cannot be questioned but this was one of those barrel tastings that leaves you with a question mark after your score and a note to self to retaste.

At Lafite-Rothschild, we had a no frills tasting of three wines. Duhart-Milon, a wine that has excited in the recent past, was decidedly grumpy so we quickly moved on to Carruades, which was on fine form, offering a classic profile of pure cassis, graphite and cedarwood. It seems very much back to form in 2015 after a couple of indifferent showings. The Grand Vin started off with a blast of creamy, vanilla-scented fruit but as we worked it in the glass and allowed it to air, it started to reveal its class and just got better and better. At 91% Cabernet Sauvignon, this too is a display of this noble grape at its purest and very best. Inky, dense and pure on the nose, on the palate, there is tremendous pressure of tannins and concentration of fruit but it moves through with such aplomb that at no point do you see a seam or a join. At just 12.7 degrees, this also has a relaxed, natural balance and the profile of a true classic for long-keeping.

Our last stop was at Pontet-Canet, conveniently situated between the two Rothschild properties. Alfred Tesseron and his team have gone fully down the path of biodynamics over the last decade and are busily extending their buildings in order to stable enough horses to work the entire estate by horse. As a result of their work, 95% of the production now goes into the Grand Vin, in stark contrast to the ratios elsewhere. The wine offers less of a classic 'Pauillac' profile but instead has a very individual, and quite delicious aromatic profile that we all enjoyed. There is certainly difficulty in the Bordeaux world in understanding the style but Alfred is convinced and indeed, those who taste widely outside of Bordeaux, such as ourselves, can also see the pleasures and benefits of this more natural approach. The balance, harmony and relaxed approach make for a real point of difference with some of the more imposing wines of the neighbourhood.

So, our final tasting completed, we accepted the kind invitation of a bite to eat at the Château and then made the trek back through the Medoc towards Bordeaux. As for the final 'wine of the day', it proved to be a split decision in the group and on reflection, this seems apt. These wines once again have proved the merits of their classification and continue to set the standards for others to aspire to: ownership of any of them will bring huge pleasure in the years to come.