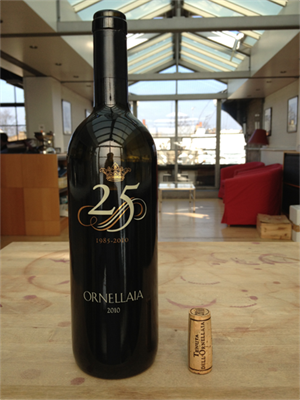 This week we were very lucky to receive a bottle of Ornellaia’s 25th anniversaryspecial edition to try in the office as well as a bottle of Le Volte 2011. It’s safe to say we were all very excited to taste the new release from this Tuscan legend.
With their 25th anniversary celebrations on the horizon, we were all hoping the vintage conditions would be evident in the glass and we weren’t disappointed. A long growing season with intermittent rainy and sunny spells created fully ripened grapes that along with cool nights provided aromatic compounds and floral qualities in the fruit. With freshness and intensity experienced in the grapes, all the signs were there for an excellent vintage. This weeks tasting backed up that claim as the Ornellaia 2010 showed wonderful potential for maturing well. There was never really any doubt as the legendary estate releases exceptional wines year upon year.
Le Volte consistently offers good value for money and the quality of the wine speaks for itself leaving some people wondering how such a pleasantly approachable wine can be so affordable. This wine is very popular at Armit Wines and we were equally excited to see how the Le Volte 2011 stood up to its predecessors. As a comparison we opened up a bottle of Le Volte 2007 to get a grasp of how these wines age in the bottle.
With the tasting over there were smiles all around the office. Yet again Ornellaia did not disappoint and left many dreaming of Tuscany….
Tasting notes on the day
Ornellaia 2010
The 2010 Ornellaia is full of finesse and elegance. With dark cherries and spice on the nose, it promised much and duly delivered; the depth of flavor was astonishing, but didn’t mask the sweet tannins which will, given a few years to fully mature, integrate beautifully. An excellent Ornellaia, worthy of the 25th Anniversary.
Le Volte 2011
Le Volte is always a favourite of ours and one of our bestselling wines each vintage with it’s marriage of class and low price! 2011 was another success with far more depth of dark fruit, far more length and better integrated tannins than you’ll find in any wine at this price. For 2010 Le Volte fans, 2011 is another excellent vintage but you’ll want to leave the 2011 until 2014 to drink – while the 2010 is drinking beautifully now.